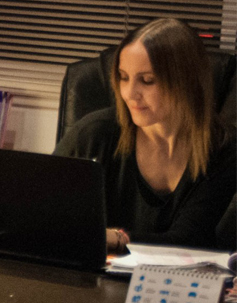 Tatiana Iacouchevskaia-Hadjittofi
Diploma Artist of Ballet
thadjittofi@hotmail.com
+357 99747363
Tatiana was born in Russia and begun her classical ballet studies in 1979 at the Frunze Choreography School in Kirgistan of the former Soviet Union. She studied for eight years classical dance, public scenic dance, classical duet dance, historical dance, theatrical dance, theatrical mastery and character dance. In 1987 she acquired her Diploma and became specialized as Artist of Ballet. After graduation, she worked for the Academical Theater Opera and Ballet of the city of Samara, where she danced and at the same time toured the U.S.S.R from 1987 to 1990. During this time, she got the chance to dance all the famous classics such as, the “Sleeping Beauty”, “Swan Lake”, “The Nutcracker”, “Spartacus” and others. She worked primarily under the supervision of the well-known choreographer Igor Chernichof. After 1990 Tatiana danced in Moscow with the dance group “Free Ballet”, where they worked with classical and modern repertoire. In 1992 she worked at Mosfilm Studios where she danced in the film-ballet “Dance of the Devil” with choreographer Leonid Lebedev. In 1996 she moved to New York where she studied for two years at the New Dance Group Arts Center, on Broadway. She studied with a well-known Broadray dancer and choreographer Steven Harding. With him she studied Jazz dance, Jazz choreography and Improvisation.
Education
Major:Artist of Ballet
Frunze Choreography School of Kirgistan
Collaborations
Performances
Contribution